Now even the scientists are starting to back up the theory that Mindfulness can help lose weight.

That was one of the trendy news of yesterday so I decided to share it with you guys but before I go into details of the news I would like to, for those who don’t know, explain what Mindfulness is.

Mindfulness is the art of living in the present moment, is an awareness that embraces the mental, emotional, physical, environmental and spiritual senses of every moment. Basically Being Mindful means to be aware all the time of what is going on inside and outside ourselves.

If you would like to know more about Mindfulness you can read my previous posts:

Now let’s see why Mindfulness can help to lose weight:

Dutch researchers carried out a series of studies to see if mindfulness, which involves blocking out distractions, focusing in the present and listening to your body, stops people from eating mindlessly.

And these are the results of the study:

Scientists claim that mindfulness, a meditation-like technique that is becoming increasingly trendy, can help us tune into our body’s hunger signals.

The researchers believe that by listening to the body and blocking out distractions, we become more aware of whether we really are hungry or whether we simply want to eat out of habit.

This will mean we only eat when we need to – and so stop the pounds from piling on.

Forget endless salads and early morning gym sessions, the key to losing weight could be all in the mind.

Another experiment suggested that listening to a mindfulness tape for a few minutes made it easier for people to realize if they were hungry.

My suggestion: a good idea would be also to start practicing meditation. 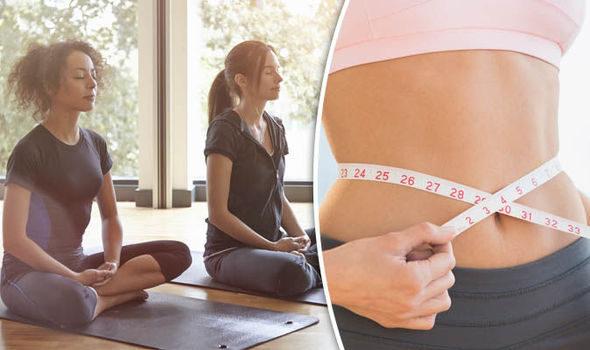 Scientists claim mindfulness is key to dropping pounds and keeping the weight off by tricking the body into wanting less food.
The practice, gaining popularity as a treatment for stress and anxiety, involves meditating and focussing on the present moment.

A new study claims mindfulness heightens people’s awareness to signals in the body released in response to hunger and fullness.

Mindfulness might also influence consumption directly [and enhance] compensation for prior food consumption (eating less when full and more when hungry).

Researchers looked at the eating habits of around 1,000 adults in five separate studies with some having practiced mindfulness.

A direct test of this hypothesis indeed shows that paying mindful attention to the body leads individuals to become more aware of the hunger and satiety cues that develop after preloads of different caloric contents.

Also, a Nottingham-based GP Ian Campbell said mindfulness is the key to weight loss and could be the answer to Britain’s bulging waistline. The Doctor is so confident in the power of mindfulness for weight loss that he advises his patients to follow the practice.

Here is what Yvonne Wake, a nutritionist at Roehampton University says:

“It is time to stop following fad diets and start looking into the psychological aspects of weight.

“Every client I have seen has some sort of psychological issue that needs to be addressed and this is something that we are finding really helps.”

Here is another article on a Clinical Study about mindfulness, published on hindawi, the journal of obesity:

Forty-seven overweight/obese women (mean BMI ) were randomly assigned to a 4-month intervention or waitlist group to explore effects of a mindfulness program for stress eating.

Groups did not differ on average CAR, weight, or abdominal fat over time.

Improvements in mindfulness, chronic stress, and CAR were associated with reductions in abdominal fat. This proof of concept study suggests that mindfulness training shows promise for improving eating patterns and the CAR, which may reduce abdominal fat over time.

Are you struggling to lose weight? Mindfulness could be the answer to your problem.